Please read the following message from the Stack Exchange network and post if you have any objections to us proceeding under the default arrangements (i.e. participating in this scheme). Econ.SE participated last year and people seemed to enjoy it.

The end of the year is upon us, and here in Stack Land, that can only mean one thing: it's time for Winter Bash 2015!

Winter Bash is a fun, lighthearted event we run every year as a way of celebrating the many amazing people who make our communities awesome. It's open to any Stack Exchange site that chooses to participate.

During Winter Bash, users earn virtual hats by completing certain tasks. They're sort of like badges, but they're more visible and less permanent. Hats can be "worn" on users' avatars just about anywhere avatars show up on the network. Here's an example of what some hats looked like last year, taken from the network leaderboard: 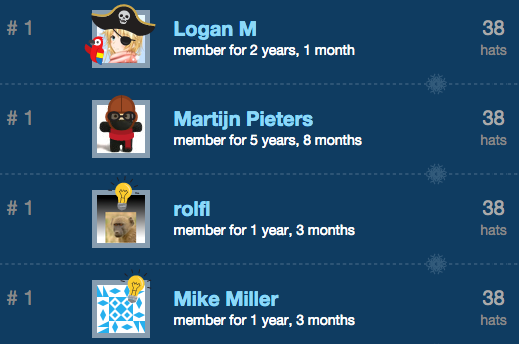 Of course, we’re rolling out an all-new assortment of hats for this year's event, as we have in the past.

This year's event will start on 14 December 2015 and run up to and including 03 January 2016. Users will be able to see all the hats they've earned on http://winterbash2015.stackexchange.com. That site will also have an FAQ to explain how things work.

Individual users who don’t want to participate, don’t want to see hats, and/or are generally anti-hat will have an “I hate hats” option available. And just like last time, at the end of the event, all hats will go back into storage.

The only visual change to the Stack Exchange sites themselves will be the presence of the hats and the “I hate hats” button in the footer.

What We Need from You

While this is meant to be fun, and individual users can opt out as described above, we recognize that some communities may not want this kind of event on their sites at all. As moderators in our network, you represent the communities that you watch over. No one knows your sites better than you do. As such, you all get to decide if they will opt in or not.

Here’s what you’ll need to do:

We should opt in, some people will not care, others will find it fun.

We should opt out, economics is serious business and I don't want netwarriors posting silly things on the site to complete challenges.

Not the answer you're looking for? Browse other questions tagged .

4
Let's get critical: May 2015 Site Self-Evaluation