5 days - Up to now, is this a satisfactory private Beta?

I say "5 days" because it has been 5 24-hour periods after I received notification from SE to join the private Beta.

I have no experience from other private Betas, and certainly Q&A subjects differ in popularity (which affects also their private Beta experience). But as in Public Beta, there must be some accumulated experience as to whether the statistics of the Private Beta indicate a site that has better or worse options for a successful Public Beta and then on to eternity.

If there are users here that have participated in other private betas (and even better, in the private Beta of the previous failed attempt for the Economics site), or also, SE community managers that have a wider picture, it would be useful to share some thoughts: I am not asking for an oracle ("you will/you will not succeed"), just an indication as to where we stand at the moment.

Just please, marketing-speak to the effect "it is too early to tell", "keep on trying" etc is not suitable here -we are economists. I am specifically asking "is it satisfactory up to know", without saying that the fate has been sealed.

Me, I will provide the data, and some comments related to benchmarks for Public Beta (of course by the time you will read this, the running data may be a bit different).

There is no relevant benchmark value for Public Beta. It is obvious that having 2 or more answers increases the chance of the OP finding something useful. Still, 22 questions with $2+$ answers remain without an accepted answer. Just in case OPs are neglecting to act on the matter, please do.

This is an indication of how many people are... "actively active" on the site. Of course from the 154 users with no rep earned here, there may be those that silently browse the site. Still, the "actively active" users are the engine of growth -let's just not put our hopes in the existence of a Solow residual.

I wouldn't worry too much about those Area 51 benchmarks - they were set out years ago, and haven't been updated with what's been learnt in the intervening few years.

64 active users isn't a huge amount: we could do with sending out more private beta invitations (see the box on the right, in the main site, labelled "Invite Fellow Experts".) 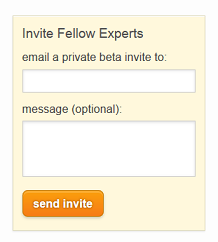 It's much easier to attract non-expert questions later, once we're known as a community of experts, than it is to attract expert answerers later, if the site has the appearance of being occupied by a bunch of novices.

Expert questions are getting posted, and generally getting answered, and that's great. It's OK to have some unanswered questions too: one of the grounds for sending a private beta out, is to link to an unanswered question, and ask the invitee if they're able to answer it; an interesting, challenging question can be a great way to hook new experts in.

We haven't done very well at getting the non-expert stuff closed and removed, which is a problem. We have some users that persist in posting non-expert content. I genuinely don't believe their intentions are of sabotage; perhaps they're just trying to hoover easy rep by asking foundational questions; or they're just so excited that they can't wait; but the result is detrimental.

activity in meta and chat

This meta is reasonably active, and that's a very good thing. Chat is active too - please do pop over and introduce yourself if you haven't already.

The really important metric, is do our experts contribute, and keep returning. There isn't a simple measure of that - it's more a question of looking at the content being generated, and looking at who's generated it.

One of the SE Inc Community Team will be along shortly to review things, and give us some guidance on whether we're close to going to public beta or not.

I've seen private betas extended by a week or two.

It's not wise to hurry it. While we're in private beta, we've all got more privileges. It's easy to create tags. We can build a core community. We've got a protected space where we can invite experts to give questions and answers. Don't be in too much of a hurry to leave that behind, because if this site doesn't take off, the next opportunity for an Economics.SE private beta could be years away ...

Not the answer you're looking for? Browse other questions tagged discussion support .

The Overflow Blog
Featured on Meta