How to change economics

Some of you will have seen my posts. I am looking for advice. I am not posting it on the main site as this is about the process of economics as a science rather than the contents.

For about a decade now, I have been trying to get a set of articles published, with great vigor recently. I have, in the last year, developed a new stochastic calculus that first-order stochastically dominates both Ito calculus and Stratonovich calculus.

As important, it makes it obvious why mean-variance finance models could never work empirically. I have also replaced the options pricing model with something that works. I also am about to replace optimal portfolio construction.

No one wants to be near it, with maybe one regretful exception. One editor that did read it, did want to try to fit it into his journal's mandate but couldn't figure out how to. I am trying to reground the entire mathematics of finance and much of macroeconomics. No one wants that even if it works.

The problem is that the work would imply that over half a quadrillion dollars in face values of derivatives contracts are mispriced (BIS data). Of course, if you look at the mountain of papers on how and why certain things do not work, that should be no surprise.

I am starting a series of YouTube videos since I have been desk rejected out the ears. I am up for any better idea. There is no point in submitting papers to editors if three or six months later I get a desk rejection letter and no review.

A direct attack on the problem yields no useful answer because it creates more parameters to solve for than there are observations. An attack in polar coordinates, however, makes it possible to focus on the distribution of the slope of the vector $$\begin{bmatrix}\epsilon_t\\ \epsilon_{t+1}\end{bmatrix}.$$

Dropping the rest of the math for brevity as the above mechanism works in some varied form for any asset including antiques, the return for equity securities, ignoring dividends, liquidity costs, merger risks and bankruptcy and after several transformations, the distribution of $R_G$ becomes the truncated Cauchy distribution.

It lacks a mean. In 1851 Augustin Cauchy proved that such a problem would cause least squares models to always produce spurious results, hence the name. Interestingly, it fits the data very well. Also, not unimportantly, the normal and log-normal do not fit well.

As an example, this is the fit for Apple. It could be improved by accounting for the uncertainty in the estimate, accounting for dividend effects and liquidity effects. I did not. Still, it is quite good. 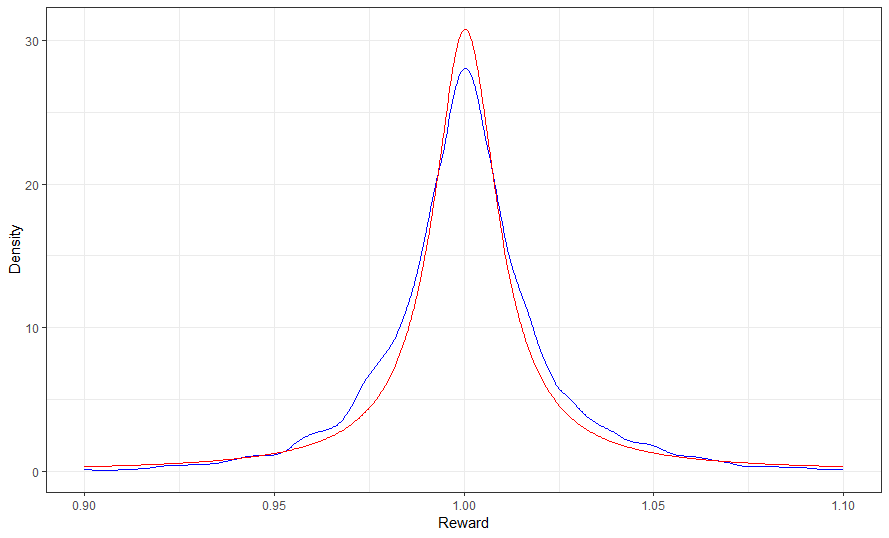 Once it is part of YouTube, it lands in the hands of grad students, which is good, but also the press. Whereas a journal article is boring, YouTube videos are accessible.

I am planning three dozen videos of around fifteen minutes each, one of thirty minutes. At the end, an entirely new model that doesn't depend on knowing any of the parameters, does not have expectations, uses all the information in the data, and can have fair gambles placed on it is created. It is going to take me months.

Nothing of the CAPM is left. No WACC, no frontier, no systematic versus idiosyncratic risk, no least-squares regression, and even diversification no longer automatically holds as a protective measure due to the absence of a covariance concept. Indeed, many people in 2008 found themselves in well-diversified holes.

I am writing this late at night and might not have posted this in the day but I would prefer to stay inside the lines and not color outside of them.

If not, have your grad students start watching YouTube about a month from now. The first video is actually out but I am revising it and have completed the scripting for the second. I am working to revise it now so I can create it.

I am looking for any idea that is better than YouTube. The only plus is that YouTube allows for a substantial expansion of the math so it is both primer and proof. The downside is a lack of criticism until after it is out there.

1) I am not in a position to judge the interest of your work.

2) I am nevertheless sympathetic to your endeavor.

3) I believe it's pretty clear that, for better or for worse, even conditional on being "right" (i.e., having a better theory), it is very hard to overturn existing and established science (there is no lack of historical evidence thereof, including evidence of "failure to revolutionize" in which the new theory was actually "right", and I don't think anyone has a clear recipe for how to avoid these failures).

4) I believe everyone would also agree that it is even harder to overturn established science starting from an "outsider" position, which seems to be your case (sorry, I don't know the details of your story, so I might be off here).

I might be wrong but I don't think that youtube videos are a good medium to present rich, new, and mathematically involved theories in detail. Even if there are benefits to producing these videos, these benefits are very unlikely to be worth the huge production cost you're about to invest in them.

(Look at the drop out rates for many video playlists on economics that are much more accessible --- and, dare I say, entertaining --- than what you seem to be headed for --- say Marginal Revolution or Game Theory Online. Youtube viewers don't stick around very long.)

6) If I have a tiny piece of constructive advice for you it is to focus your efforts on addressing 4).

As terribly frustrating as it may be in your position, if you're 100% dedicated to advancing your theory, the best way might be to first "fall back in line". (Again, I don't know the details of your personal story, so you might have already tried this and the following might be irrelevant):

Another analogy is: I took you seriously and decided to answer your question not because I understand your theory and believe it might be valid --- again I am not in a position to do that --- but, in part, because you're on the higher end of the reputation distribution for this site, which you must have predominantly earned by answering questions that are not related to your own new theory.)

PS: I don't think it matters much --- and it's certainly debatable --- but I think this could very well be on-topic on the main site as well (at least if you put more effort into striping-off your question from its self-promotional content).

PPS: The proof is also in the pudding. If, as you claim, existing theories imply that billions of dollars of assets are mispriced and your theory can price them better, am I wrong to assume that an investor using your theory would be able to take advantage of arbitrage opportunities and make a lot of money? If that's correct, then the best way to convince people your theory is "the one" would be to make a couple millions out of it (I am really not joking here).

I'd just like to reinforce Martin Van der Linden's point again. I would also like to first emphasize that I am not in a position to judge your work either.

The way I see it, your fundamental problem is how to get attention for your work. Especially from the right people.

In a comment about YouTube you say "It also could force the discussion if the right person reads it and understands it." Those are two very big ifs even if people were willing to quickly throw out everything they thought they knew about finance, which they probably are not. The most scarce resource on the planet is attention, especially that of big scholars who you need to convince.

The only way I can think of is to publish a couple papers first in good peer-reviewed journals by advancing someone else's research agenda. This will a) increase visibility of your other work and b) increase people's priors that your theory might be correct. Especially since understanding your technical work will require some effort on most people's part, it is unlikely someone will even start to read your papers if you don't have the aforementioned point b).

Not the answer you're looking for? Browse other questions tagged discussion .

12
60 days in Beta - Battle cry?
7
Might basic finance questions be on-topic?
3
How should this five part question be handled?
2
Include history of economics, plain economic facts
9
MathJax basic tutorial and quick reference
4
272 days in Beta - What's next?
5
What kind of math/stat questions allowed?
1
How to add information here on topics on which you already provide information elsewhere online?
9
Ranking of votes by reputation among top (+1k) users