Ranking of votes by reputation among top (+1k) users

I created a small query to produce a list of number of votes per reputation among +1k users (49 in total). This is, in my view, one of the many indicator of relative contribution to the site. Voting is important primarily because it works as a signaling process conveying information about quality of Q&A. They are the equivalent of prices in real economies, of which importance we as economists are very aware. It also acts as a reward for contributing users asking good questions and providing good answers.

The full ranking is in the page above (after you run the query). Below I copy top and bottom. VotesPerRep is in percentage terms. 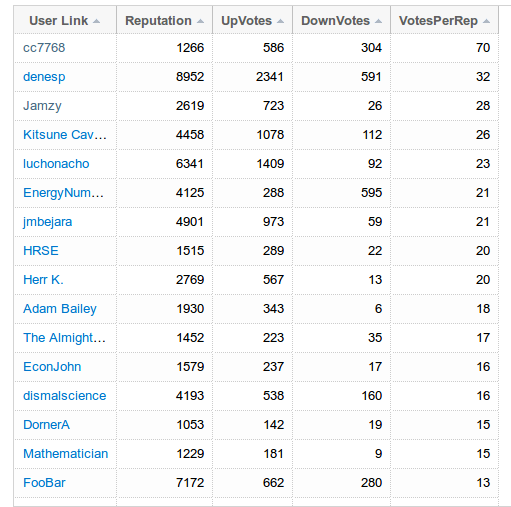 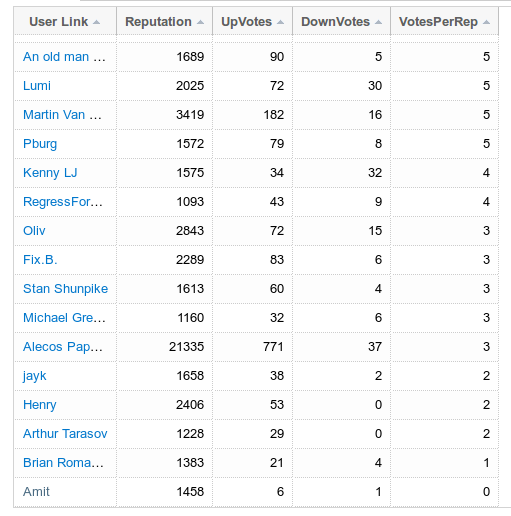 I am of course not going to point out names, except for congratulating those with high raking like denesp and Kitsune (I have not interacted with cc7868 and Jamzy). There is however a massive disparity among the group, which if anything is negatively correlated with reputation. This might be due to some outliers though: 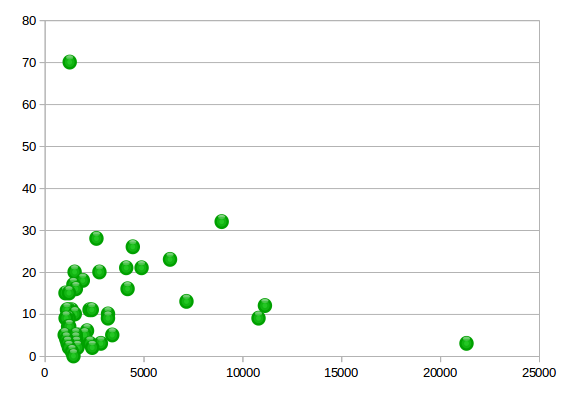 A more refined analysis would remove those users that are highly inactive (maybe those which have not provided an answer or question e.g in the last six months), but that is left to whoever wants to play around with the query.

I find a methodological problem here: I would not use "reputation" but rather "number of questions posted + answers replied": Reputation may correlate with the latter, but it also has an element of "popularity".

But it appears you want to compare different aspects of activity of each user. So it would be better to calculate "for every post (except comments) how many votes".

The ranking won't necessarily be much different, but it would be more sound methodologically, free of "popularity bias".

At the instance of Lucho, I'm transposing my comment into an answer, even though I'm not sure if it'll bring anything new to the table.

«Lucho, so are we to vote in questions, even if we don't have any interest in them, or know nothing about(my case)? I see a case of a user, who probably is someone who has most of the best answers in this site, and still ended up in the bottom. This metric hardly measures more than a small part of 'forum engagement' by the users. It may neglect people who have contributed immensely by answering numerous questions, but just didn't upvote the question, or other answers. Why not upvotes*(answers+questions)/reputation?»

Not the answer you're looking for? Browse other questions tagged discussion reputation voting site-analysis .

12
60 days in Beta - Battle cry?
11
150 days in Beta - Is it picking up speed?
1
A redistributive tool for reputation points?
2
Extremely unusual question/answers. This is very likely a FRAUD
5
Let us not forget duplicates